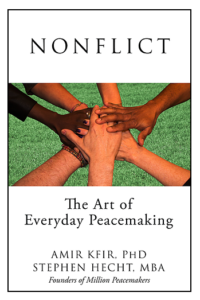 How to Transform Conflict into Nonflict

Doing research about conflict I came across “Nonflict”. I immediately ordered the book and read it. I was so fascinated about the simplicity and effictiveness of this method that I decided to become a “Certified Nonflict Coach” and empower my clients even more to overcome conflicts in business, in family and in person.

Three simple and powerful steps to transform conflict into Nonflict

The Nonflict way is a simple and effective 3-step method that provides a structured approach to conflict resolution. The steps lead people to understand themselves and one another, then to discuss their shared reality, and finally to take active steps to co-create their ideal reality.

Million Peacemakers is a Non-profit organization founded by Steven Hecht, Dr. Amir Kfir and Frederic Latreille. Million Peacemakers Mission: Create a culture of peace in the world by empowering people to transform Conflict into Nonflict.

In May 2012, Stephen Hecht as Education Chair for YPO Gold Canada and corporate transformation expert, Dr. Amir Kfir led a YPO event called The Art of Peace in which they trained 700 CEOs, their spouses, and young adult children in Nonflict.  It received a record 6 ‘Best of Best” international awards for Leadership Development.  Stephen and Amir then replicated this event worldwide, training hundreds of CEOs in the U.S., India, Tanzania, Dubai, Israel, etc. In August 2014 Stephen, Amir, and Frederic Latreille co-founded Million Peacemakers.

There are currently over 145.000 peacemakers trained in Nonflict worldwide.

This website uses cookies to improve your experience while you navigate through the website. Out of these, the cookies that are categorized as necessary are stored on your browser as they are essential for the working of basic functionalities of the website. We also use third-party cookies that help us analyze and understand how you use this website. These cookies will be stored in your browser only with your consent. You also have the option to opt-out of these cookies. But opting out of some of these cookies may affect your browsing experience.
Necessary Always Enabled
Necessary cookies are absolutely essential for the website to function properly. This category only includes cookies that ensures basic functionalities and security features of the website. These cookies do not store any personal information.
Non-necessary
Any cookies that may not be particularly necessary for the website to function and is used specifically to collect user personal data via analytics, ads, other embedded contents are termed as non-necessary cookies. It is mandatory to procure user consent prior to running these cookies on your website.
SAVE & ACCEPT